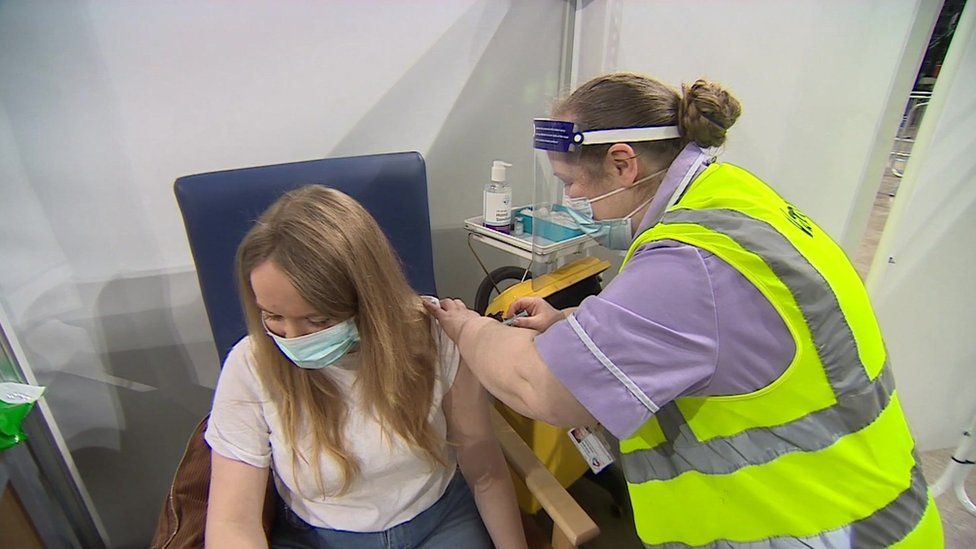 England is giving out its first doses of the Moderna jab, the third Covid-19 vaccine in the nation’s rollout.

It will be available at 21 sites, included the Madejski Stadium in Reading.

Along with the Pfizer jab, it offers an alternative to the Oxford-AstraZeneca vaccine for under-30s, after concerns about a possible link to very rare blood clots.

Click here or on the image above to read more details.

People 45 or over in England invited to book vaccine

People aged 45 or over in England will now be invited to get a Covid jab, Health Secretary Matt Hancock has said.

The vaccination programme would then move on to everyone aged 40 or over “in line with supplies”, he added.

Appointments can be made on the NHS booking website, which temporarily crashed on Tuesday morning when it opened up to the new age group.

Read the details by clicking here or on the image above.

Some of the rules on what you can and cannot do will change from Monday 12th April.

Read the full details by clicking HERE or on the image above.

We at Healthwatch West Berkshire are deeply saddened  to hear that HRH the Duke of Edinburgh Prince Phillip has passed away. We offer our deepest condolence to the Royal Family

In a statement shortly after midday, the palace said: “His Royal Highness passed away peacefully this morning at Windsor Castle.”

The duke, who was the longest-serving consort in British history, had returned to Windsor Castle on 16 March after spending a month in hospital.

The palace said further announcements would be made “in due course”.

“The Royal Family join with people around the world in mourning his loss,” the statement added.

Speaking at Downing Street, the prime minister added: “He helped to steer the Royal Family and the monarchy so that it remains an institution indisputably vital to the balance and happiness of our national life.”

Mr Johnson said he received the news of the duke’s death “with great sadness”.

“Prince Philip earned the affection of generations here in the United Kingdom, across the Commonwealth, and around the world,” he said.

Everyone in England will be able to access free, regular, rapid coronavirus testing from today (9th April), the government has announced.

Alongside vaccine rollout, regular testing is at the heart of plans to reopen society and the economy, helping to suppress and control the spread of variants

Updates will be made to the NHS COVID-19 app in England to coincide with the universal testing offer.

Click here or on the image above to read further details.

– From 31st March, 20m doses of the Oxford-Astra Zeneca vaccine were given and 79 cases of rare blood clots were reported.

– People who have had Oxford jab should still take second dose

Watch the briefing in full by clicking the video above. Or click here for more details.

We are currently running surveys and are seeking your views on dental services and care homes.

Welcome to Healthwatch West Berkshire, your local consumer champion for health and social care services. We are gathering your views and taking it to those who deliver and commission services. We are committed members of the community who have the authority to make your views heard and campaign for change.

Find out how you can Get Involved Here

Tell us your Dental Priorities for West Berkshire

Let us know your views on care homes during the pandemic

Coronavirus Guidance in accessible formats and other languages

Find Services Near You